How to Build a Nuclear Shelter to Avoid Agonizing Death

In this article, we’ll exclusively explain how to build a nuclear shelter. This guide is good for both scenarios,i.e., before and after a nuclear blast. I recommend you to first check out this guide about how to survive a nuclear attack if you are not in the epicenter. You’ll get enough knowledge about survival after a nuclear blast. A shelter is definitely the most important part of the survival but remember, it’s not the only one. Also, all the technical terminologies used below are explained in that article.

Did You Know
Well over 90% of those potential casualties from fallout are avoidable simply by educating the masses.

1. Why You Need a Shelter in Case of a Nuclear Blast?

Every nuclear blast (either nuclear attack by other countries or a nuclear disaster in your own) will consist of a ground zero and its adjacent area. If by luck you are in epicenter (ground zero) and already not in a nuclear shelter/bunker, you are most likely to die in the first minute; either by blast or by high-intensity radiations. However, if you are in the adjacent area, you might have a survival chance. That too only if you are super fast and find/make or rush to a shelter. Well over 90% of those potential casualties from fallout are avoidable too. Simple measures taken immediately after a nuclear detonation can prevent agonizing death and injuries from radiation.

For ground zero, where the bomb was actually dropped, protection from the blast, fire, and fallout would be required. For all other areas, more than 95% of the country, protection from fallout should be the only concern. The blast and fire protection require very strong and usually underground structures, but even simple earthen shelters built in the backyard can give enough protection from a 1 MT (1000 kilotons) surface blast as close as 2 miles. Radioactive fallout is extremely dangerous because it’ll give you radioactive injuries which are difficult to heal. But at the same time, it will quickly become less dangerous as it exhausts itself (radioactive decay).

The primary reason to find or build a nuclear shelter is to get protection against the high-intensity Gamma fallout. The most penetrating and destructive radiation you’ll have to deal with. Without shelter, the dosage received in the first few hours will exceed that received during the rest of a week in a contaminated area. The dosage received in this first week will exceed the dosage accumulated during the rest of a lifetime spent in the same contaminated area. Therefore, speed in finding shelter is an absolute essential.

Literally, all materials provide radiation protection to some extent, some might provide less protection and some provide more. You will have to use a sufficient quantity of any material to protect against the radiation. Barriers of lead, concrete, or water provide very good protection from all types of penetrating radiation. This is why certain radioactive materials are stored under water or in concrete or lead-lined rooms. Also, this is why dentists place a lead blanket on patients receiving x-rays of their teeth. Lead is one of the best and scientifically tested material for protection against radiation. Lead and its alloys offer excellent radiation shielding because of a high degree of application flexibility, an extreme level of stability, and high atomic number. A thick blanket of dirt will also greatly reduce the effects of radiation. Keep these materials in mind when you build a nuclear shelter.

The principle of half-value layer thickness is useful in understanding the absorption of gamma radiation by various materials. According to this principle, if 5 centimeters of brick reduce the gamma radiation level by one-half, adding another 5 centimeters of brick (another half-value layer) will reduce the intensity by another half, namely, to one-fourth the original amount. Fifteen centimeters will reduce gamma radiation fallout levels to one-eighth its original amount, 20 centimeters to one-sixteenth, and so on. Thus, a shelter protected by 1 meter (3 ft) of dirt would reduce a radiation intensity of 1,000 cgys (centigrams) per hour on the outside to about 0.5 cgy per hour inside the shelter.

Speed in finding shelter is an absolute essential.

4. Construction of Shelter Before a Nuclear Blast

If you are just prepping for nuclear attack/blast, it’s better to build a shelter underground. Having thick concrete and brick walls is the best idea. If there is an exposed side of this basement, like a door or window, don’t forget to cover it with lead sheet. I highly recommend that you make some ventilation shaft that can be opened/shut from inside the shelter. If you get a nuclear blast warning from your government, rush to the shelter as fast as possible. This shelter will be your new home for the next 10-15 days, therefore, you should have all the necessary supplies and utility items in it. In another guide, I’ll explain about the items you should have in your nuclear shelter.

5. Emergency Shelters After a Nuclear Blast

You may not get an early warning about an imminent nuclear blast because of many factors involved in it. Therefore, you may not have the time to build a nuclear shelter. So you may have to resort to makeshift arrangements to survive for some initial time. In that case, ground that provides natural shielding and easy shelter construction is the ideal place for an emergency shelter. Basements and central floors of high rise buildings also provide very good protection against fallout radiation. However, high rise buildings will be very dangerous if they are in the epicenter. Other good examples are ditches, ravines, rocky outcropping, hills, and river banks etc. 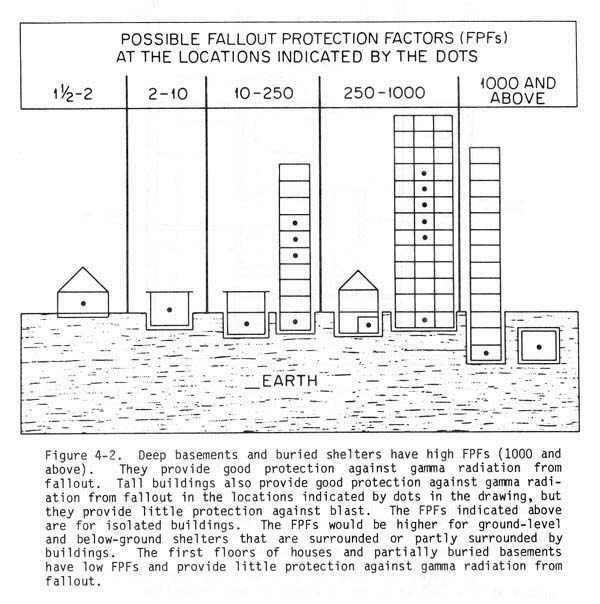 In areas where there is no natural protection, and you don’t have time to build a nuclear shelter, digging a slit trench is the best bet. When digging a trench, work from inside the trench as soon as it is large enough to cover your body. This way you’ll not expose all your body to the radiation. In an open area, try to dig the trench from a prone position, stacking the dirt carefully and evenly around the trench. On level ground, pile the dirt around your body for additional shielding. Depending upon soil conditions, shelter construction time may vary from a few minutes to a few hours. If you dig as quickly as possible, you will reduce the dosage you receive.

While an underground shelter covered by 1 meter or more of dirt provides the best protection against fallout radiation, the following unoccupied structures (in the order listed) offer the next best protection:

GetSurvival Guides Right to Your Inbox

We often create such amazing guides as you have read above. Drop your email below to receive latest Survival Guides specially crafted by our Survival Experts.

We'll never spam your inbox, that is a pinky swear.

It is not mandatory that you build a roof when you build an emergency nuclear shelter. Build one only if the materials are readily available with only a brief exposure to outside contamination. If building a roof would require extended exposure to penetrating radiation, it would be wiser to leave the shelter roofless. A roof’s sole function is to reduce radiation from the fallout source to your body. Unless you use a thick roof (around 1 meter), a roof provides very little shielding.

In case of emergency, where you do not have many items available, make a roof from any cloth/sheet by anchoring it down with dirt or rocks. You can remove large particles of dirt and debris from the top of that cloth/sheet by beating it off from the inside at frequent intervals. Definitely, this sort of roof will not offer shielding from the radioactive particles deposited on the surface, but it will increase the distance from the fallout source and keep the shelter area from further contamination.

Decontaminate any materials you bring into the shelter. These materials include grass or foliage that you use as insulation or bedding, and your outer clothing (especially footgear). If the weather permits and you have heavily contaminated outer clothing, you may want to remove it and bury it under a foot of earth at the end of your shelter. You may retrieve it later (after the radioactivity decays) when leaving the shelter. If the clothing is dry, you may decontaminate it by beating or shaking it outside the shelter’s entrance to remove the radioactive dust. You may use any body of water, even though contaminated, to rid materials of excess fallout particles. Simply dip your clothes into the water and shake it to get rid of the excess water. Do not wring it out, this action will trap the particles inside the fabric.

If at all possible and without leaving the shelter, wash your body thoroughly with soap and water, even if the water on hand may be contaminated. This washing will remove most of the harmful radioactive particles that are likely to cause beta burns or other damage. If water is not available, wipe your face and any other exposed skin surface to remove contaminated dust and dirt. You may wipe your face with a clean piece of cloth or a handful of uncontaminated dirt. You get this uncontaminated dirt by scraping off the top few inches of soil and using the “clean” dirt.

To reduce your exposure time and thereby reduce the dosage received, remember the following factors when you select and build a nuclear shelter:

I humbly request all the readers if you find out any error in this article, please inform us so we can fix it. HAPPY SURVIVING.

What you say ? Cancel reply 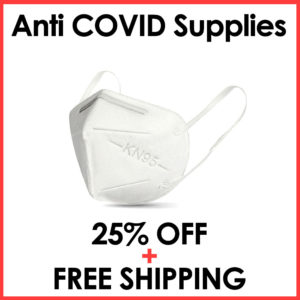 Is it Really the Strongest Tactical Belt?